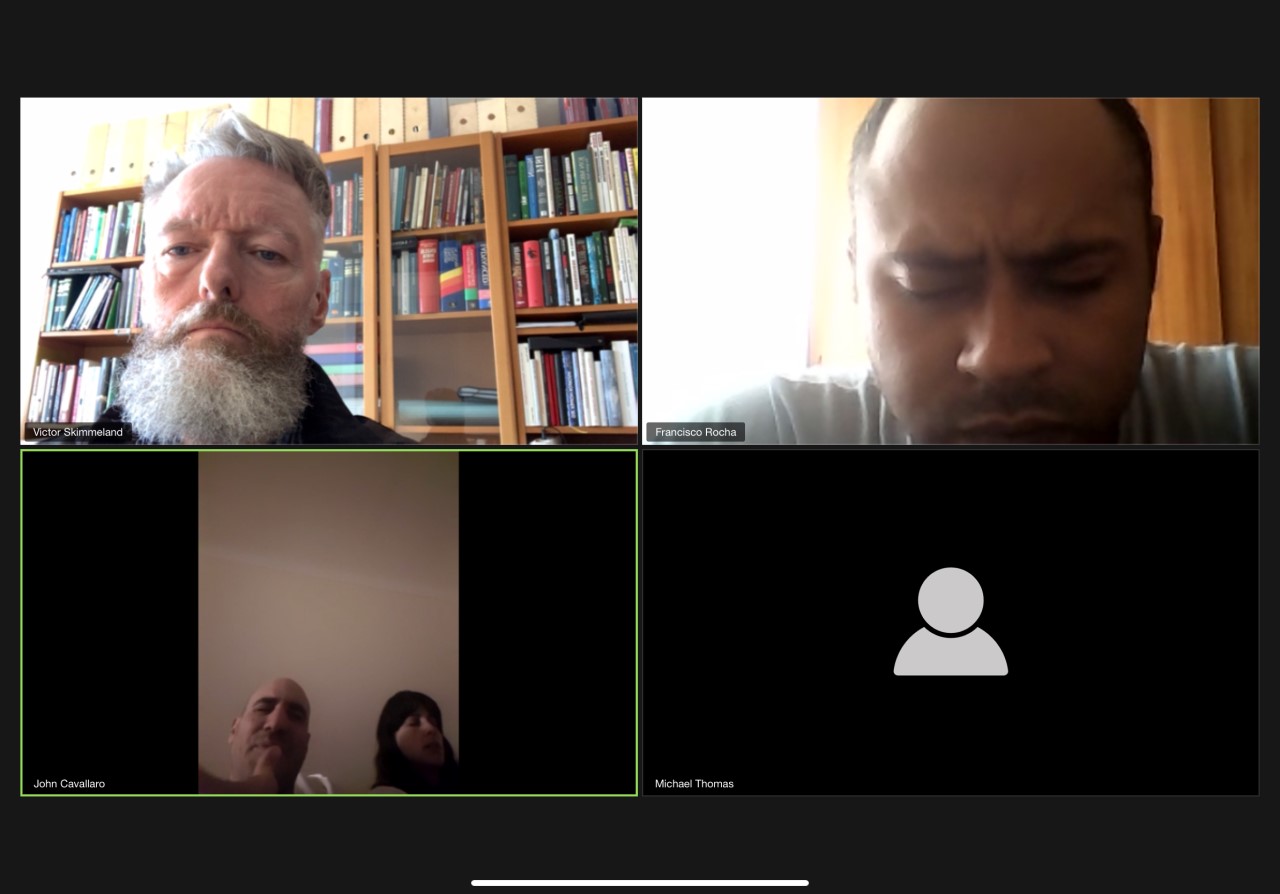 ENGLISH/THE ROAD AHEAD A full drizzle for weeks now. Doctors scared of new cancer. Personal challenges. In a few words, that’s the sum of my worries. Then, I found the solution!

The last few weeks have proven difficult to handle. Some personal challenges may be shared, in part, later, while I will still keep what’s really private, private. Personal matters, however, should not always be kept private. The result of keeping too many worries private has been a literal draught in my writing and preaching for several weeks now.

THEN, CIRCUMSTANCES FORCED ME TO PIVOT. Circumstances, or, these boys! For more than half a year I’ve been part of an international prayer network–the International Network of Kingdom Creators–which works cross-denominationally. Today, I was invited to participate in a small gathering on Zoom. Michael Thomas lead the video conference on a poor dial-up from Bratislava, Slovakia; Francisco Rocha had just risen in Brasil; John Cavallaro and Melissa were close to bedtime in Australia, and I was lunching at my office in Sandefjord, Norway.

Suddenly, I was reminded that my own experience COMBATTING CANCER has been a totally different one. Worries, repreated surgeries and heavy medication are not the full story of my life. Even if all my prayers haven’t yielded the results I hoped for at the time I have always received answers. I have experienced peace of mind. And, literally gotten rid of my worries. (This is what I dreamt during my first brain surgery—use Google Translate to read my Norwegian.)

The same happened again today. While we were praying — we were going on for an hour or so — calm settled in. I felt safe. Had I really had anything to worry about, then? I do not share much from my private life in public. Not this time either. Maybe I’ll share more later, though. But personal challenges are still more than private problems. I don’t think my prostate should be kept so private that it stays out of my prayer list. The idea that a man’s prostate is private is perhaps the main reason for prostate cancer being the cancer that kills most Norwegians. Every year. Too little research on prostate cancer is carried out in Norway, too, because we really don’t speak about it.

I sensed that my worries had grown over time. This was an ‘out of bounds’ issue at home. When my initial cancer had vanished, the issue had also been banned from daily conversation. Wifey was probably right when she pointed out that I had been speaking too much about cancer when I still was ill. On the other hand, problems had been allowed to mount when I hadn’t been able to talk about them.

WE ARE TALKING PROSTATE CANCER. Some months ago my oncologist worried that I had caught more cancer. On this occastion, prostate cancer. She had ordered additional testing but results were inconclusive.

Last week my General Practioner wrote. She was worried, too. In her opinion my blood work seemed to indicate prostate cancer.

This week saw me going to hospital for an invasive check-up. Within eight weeks I will also be subject to surgery and biopsy in order to find out how my condition really is.

All in all, this could be worrisome to anyone. Still, I am not at all that worried. Not anymore.

While we were chatting and praying, I sensed that I was the master of my own destiny. Or — that God is indeed in control! While Michael conducted the conference, I declared that my prostate issue was not a malign one. I believed it when I declared it. This was not a cocky blurting-out; this was a deep conviction. This was faith!

So, why do I write this now? Why do I challenge God, as some will surely have it. Because it’s always easier to claim what God has done when the results are in. Now, I will be risking being called ‘Liar, liar, pants on fire’ if I were to be wrong.

But I am certain that God is in control! I WILL be healed!

The call will be made in a few months, when the results from biopsy and pathology have come.

ANYWAY, LET’S HAVE A PRAGMATIC LOOK AT THE ISSUE, TOO. This is not the Shaman Voctor speaking rubbish, as in the Shaman Durek who captured the heart of the Princess of Norway, but not her kingdom.

I am well acquainted with cancer. This time the signs are, however, pointing in a different direction. Yes, I certainly have problems with my prostate. I am a man of 56 years of age now, and the previous cancer treatment did too much damage to my body. The immunotherapy I received after the previous cancer was gone damaged kidneys, liver, eyes. For a while. I also got hives, allergies, weight loss, weight gain and much more. All the adverse effects you can imagine. While I was receiving treatment, my prostate also grew. I didn’t think much of it then.

Back in August 2015 I lost the ability to pee. Since then I have used a catheter. Shortly after, I also discovered that I was impotent. The sexologist at the Norwegian National Teaching Hospital for Oncology (Radiumhospitalet) could’t do much about the problem, but she helped me look ahead. Although the neurosurgeons did not understand why I had these problems, we eventually agreed that they might relate to the malign tumors on my brain stem. It was very well a possibility that the signals from the groin had been cut over. I had also become totally deaf after the third intervention into the brain, without the medical doctors understanding why. I had heard well when they temporarily woke me up during the procedure.

This week I was at the hospital again. While the urologist would not rule out anything, he found that the nerves still seemed to be working as they should. The groin blockage was due to pressure from the prostate, not nerve damage. He recommended surgery. He expected that I would both be able to pee again, without help, and perhaps the potency would also return. Almost four years as ‘a monk’ may end in a few months.

READ UP >> His cancer vanished after a pilgrimage to Jerusalem

SO, THE WRITER’S BLOCK IS OVER, THEN? I’ve had more than enough to occupy my mind. I can see that clearly now. Suddenly, I was free. I’m ready again. I will gradually step up my writing. Already coming Sunday I’ll be back on the pulpit. And soon I expect to be able to declare that I have no new cancer, and also, that I can pee on my own again.

PREACHER.no © 2019 Victor Skimmeland. All rights reserved. No part of these texts may be copied or reprinted for commercial gain. However, all stories are meant to be shared and used but do please reference the source. For other than non-commercial uses please obtain advance permission in writing from the author.